We are moving to new offices, if you need assistance you can reach us at sales@buytelesopes.com

Stock photos provided by the manufacturers may not represent the actual item. Please verify this picture accurately reflects the product described by the title and description before you place your order.

Be first to review this item and help others
QHYCFW3S-SR7 filter wheel combo package. 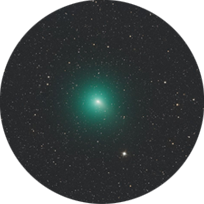 QHY CCD QHY183M, 20 Megapixel, High Res, High QE, Back-Illuminated Cooled COLDMOS Camera
The QHY183 is a one-inch, 20 Megapixel back-illuminated COLDMOS color camera.  The pixel size is 2.4um for high-resolution with modest size telescopes.  The camera is capable of producing 15FPS@20 Megapixels.  It has a two-stage TEC that cools the sensor to -40C to -45C below ambient.  The ADC is 10/12-bit and 8/12-bit output with 1e- read noise!  The computer interface is USB 3.0 and exposure times can be set from 50us to approximately 1000 sec.
128MB DDR Buffer
The QHY183 has a built-in 128MB DDRII image buffer. The benefit of the image buffer is that the memory will cache the image and transfer it to the computer when the USB interface is not busy or being interrupted, and the frame will not be lost or corrupted.  This buffer also allows a slower computer with USB 2.0 socket to capture every frame without loss even if the USB socket is occasionally busy with other peripherals.  This buffer also helps multiple camera applications and avoids USB transfer problems.  For example, it is possible to operate four QHY183 cameras on the same computer to create an LRGB imaging array.
Full Anti-Dew Solution
With more than a decade of experience designing cooled cameras, QHYCCD has applied this knowledge to the QHY183 camera.  The full anti-dew technology includes a sealed CMOS chamber with silicon gel tube socket and a heated chamber optical window.  This technology prevents dew from forming on the sensor itself, or on the chamber window, even in a high humidity environment.
Sony's Image Sensor Exmor R is a back-illuminated CMOS image sensor with improved sensitivity and noise reduction - the key factors to enhancing image quality, while radically realigning their fundamental pixel structure from front-illumination to back-illumination. It retains the advantages of CMOS image sensors such as low power consumption and high-speed operation while dramatically improving sensitivity.  With a conventional front-illumination structure, the metal wiring and transistors on the surface of the silicon substrate that form the sensor's light-sensitive area (photo-diode) impede photon gathering carried out by the on-chip lens, and this has also been an important issue in the miniaturization of pixels and widening optical angle response.
A back-illuminated structure minimizes the degradation of sensitivity to optical angle response, while also increasing the amount of light that enters each pixel due to the lack of obstacles such as metal wiring and transistors that have been moved to the reverse of the silicon substrate.  However, compared to conventional front-illuminated structures, back-illuminated structures have historically caused problems such as noise, dark current, defective pixels and color mixture that lead to image degradation and also cause a decrease in the signal-to-noise ratio  To overcome this Sony newly developed a unique photo-diode structure and on-chip lens optimized for back-illuminated structures that achieves a higher sensitivity and a lower random noise without light by reducing noise, dark current and defect pixels compared to the conventional front-illuminated structure.  Additionally, Sony's advanced technologies such as high-precision alignment have addressed any color mixture problems.

Notify me when available!
Add to wishlist